The bed is considered the most important piece of furniture in the household. Mattress is the main part of a bed. For a good night’s sleep, the basic necessity remains that of a good quality mattress. It has a wide variety of types depending on its nature and feature. Coil, spring, latex, foam, futon, water, air, etc. are all kinds of mattresses and each of these has its own varieties.

In fact, the evolution of the mattress has been slow going. Over the centuries, mattresses remained unsophisticated—and uncomfortable. Up until the 20th century, mattresses were filled with horsehair, rags or cotton and highly unsanitary, difficult to clean and lumpy. Poorer people relied on ticks —fabric sacks stuffed with straw, corncobs, or other crop debris. In addition to offering an inconsistent texture, such primitive mattresses were difficult to clean—and they generally started out dirty, stuffed as they were with agricultural debris that often entered the pad or ticking with soil and insects. However, they offered one concrete advantage: made at home from cast-off farm goods, they were cheap. Even late in the nineteenth century when small local manufacturers began to produce mattresses commercially, the items remained inexpensive because early mattress makers continued to rely on extremely inexpensive stuffing.

It wasn’t until the 1850s that the first significant advance in mattress design appeared – the use of uni – form springs underneath the layers of upholstery. In mid 19th century, a significant development was made in the form of mattresses with stabilized interior springs. The mattress got firm and resilient with a uniform texture all over. These innerspring mattresses used to be made by placing a set of uniform springs inside the layers of upholstery. After that mattresses just became popular so much so that today they are one of the most important home furnishings. Presently, the consumer demand for mattresses is fairly consistent. In 1990, approximately 16 million mattresses were sold in the United States. Together with foundations, mattresses accounted for about $4 billion in retail sales. With the exception of a few large compa – nies, most mattress manufacturers are fairly small, community-based operations. Of the approximately 825 mattress factories across the United States, most are still owned and operated by the founding families.

The core of a mattress is formed by making an innerspring unit. It is a series of wire coils, attached to each other with additional wire. Four types of coils are mostly used by the mattress manufacturers- the Bonnell; the Offset; the Continuous; and the Pocket System. The hourglass-shaped Bonnell springs are knotted at both ends. Offset spring is also in the shape of an hourglass but its top and bottom are flattened so as to facilitate a hinging action among the coils. Continuous innerspring is one very long strand of steel wire configured into S-shaped units. Pocket coil is encased in a fabric which also connects it to the adjoining coil-casing units. A mattress can have anywhere between 250 and 1,000 coil springs. In the mattresses that have fewer coils, a heavier gauge of wire has to be used. The individual coils can be attached in a variety of ways. One general method is that of using helicals the corkscrew-shaped wires which run along the top and bottom of the springs, lacing the coils together. Rigid border wires are also attached sometimes around the perimeters for stabilizing the innerspring unit. In most of the cases, a mattress manufacturer does not make the innerspring units. Instead, subcontract the production of the innerspring unit to an outside firm that specializes in making springs. . Once these completed innerspring units are received, the work of at the mattress factory begins. The manufacturer applies the cushioning layers that will determine the feel and comfort of the final product. The textile furnishing layers are affixed to the innerspring manually. There are essentially two upholstery layers- the insulator and the cushioning layers. The insulator, is affixed directly onto the innerspring and prevents the next layer, the cushioning layer, from molding to the coils. While the insulator used is almost standard, the number of cushioning layers differs widely in number. These cushioning layers range from 2 to 8 layers and from 1/4 inch to 2 inches (.63 to 5 cm) in thickness. These cushioning layers determine the feel and comfort of the end product.

* While this process in being undertaken, the decorative outside cover is being sewn in another area of the plant. Made on a gigantic quilting machine, a huge number of needles attach the cover to its backing material. The stitching actually serves a dual purpose in that it prevents the mattress cover from shifting and makes a beautiful ornamental exterior. The quilted fabric is then cut into the top, bottom and side panels of the mattress. Side handles or vents are affixed to the sides at this time as well.

Then, too, critical inspections are completed at various points of the manufacturing process to ensure quality control, but are most generally done: after receiving the innerspring, before closing the unit, and before packing. The quilted fabric is cut into panels that are attached to the top and bottom of the mattress. The side panels are often cut from the same quilted fabric but sometimes it is made separately on a border machine. Side handles or Vents, if they have to be fitted to the side panels, are attached before these side panels are applied to the mattress. Closing operation is very critical which needs highly skilled execution. A movable sewing head that is mounted on a track is used for the closing operation. The Tape edge operators manually feed the top, bottom, and side panels and a heavy duty binding tape into the sewing machine as it moves around the mattress. It highly depends on the skill of the operators to feed just the right amount of each material into the machine in order to get the end product of a professional standard. A foundation mattresses or boxsprings lie directly beneath the mattress, resting on the frame of the bed. There are different varieties of boxsprings. In some of them, spiked coil configuration is used where there is a spring system while in others, torsion bars are used for giving support. In yet another type of boxspring, no springs at all are used and it consists of a built-up wooden frame. From among these, the boxsprings having spiked coil design are the most common ones. The spiked coil design boxspring is made by attaching the bottom of each coil to a flat wooden frame. A wire grid is placed on top of the springs in an aligned manner and is locked manually. A thin layer of upholstery is attached at the top. If, however, the intended boxspring contains no springs, it consists of a wooden frame that may or may not have a layer of upholstery attached to its top. The frame is usually inserted into a pre-sewn cover that encases the top and sides of the unit, regardless of the internal composition. A matching fabric border is applied to the sides, and a dust cover is also added to the face. The completed unit is inspected, a content label is attached, and the finished product is moved to a packing area where it gets a protective cover made of either paper or plastic. A tag featuring fire resistant properties also is attached, a requirement that began in 1987. 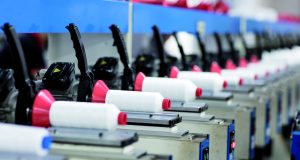 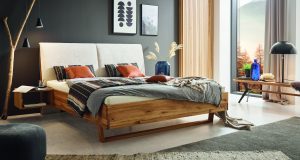 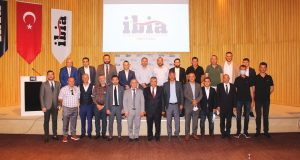 IBIA at the service of the world bedding industry 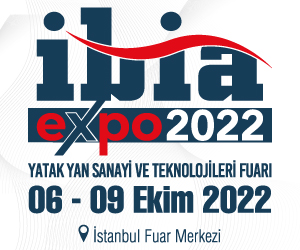